An Olympic Dream, 20 Years in the Making

I can still remember the exact moment I made up my mind that I wanted to cover the Summer Olympic Games.

As an “80s baby,” I was in diapers during the ’88 Olympics and too young to appreciate ’92. So as a nine-year-old, summer birthday-girl growing up in Oklahoma City, 1996 was my inaugural Olympic year.

And I was all in.

My love actually began to blossom weeks before opening ceremony. My dad, visiting Atlanta on business, decided to bring me along to watch the Track and Field Olympic Trials. I still remember my first time seeing the Olympic Cauldron. Growing up in Oklahoma City, tall buildings – truly tall buildings – were a rarity. So when we arrived for our first day at the track, I was immediately struck by the Olympic Torch. Of course, at the time, it was not every day that one saw an ornate cauldron looming in the sky. But I remember being awestruck by how tall it seemed. I stopped to take it in. The stairs – would somebody really climb those all the way to the top? What will it look like when it’s all lit up? For the rest of our trip, that torch became a beacon. In the stadium, riding in the car – I would stop and search for that torch, and stare – probably still in disbelief that it was really there.

Then, there was the excitement. It seemed literally every hour, every minute of the trials, the village was buzzing. Former Olympic icons popped up at every turn. My dad introduced me to Flo-Jo (in my 9-year-old mind, the beautiful lady with the really long, colorful nails). And when a race hit the track, it seemed all time stood still.

I loved every second of it. 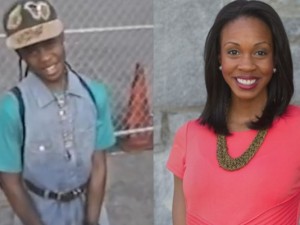 When we went home to Oklahoma, and the sights and sounds of the trials gave way to televised coverage, my excitement didn’t dwindle one bit. I watched my first gymnastics competitions. Saw swimming at a level I didn’t even know existed. Marveled at the precision of the divers. Even found myself mesmerized by the weight lifting competitions.

But even more than that – I loved the little details. I memorized the commercials (the Jordan commercial with Mary J. Blige covering Stevie Wonder’s “Overjoyed” was my favorite). The Olympic fanfare became my theme music – I hummed it everywhere I went.

And so it went, for every Olympic cycle thereafter.  Sydney. Athens. Beijing. London. From teenager to college student to working adult: every four years, for nearly three weeks during the summer, I was transfixed.

When we traveled to Atlanta to watch the trials that summer, I already knew in my little mind that I wanted to grow up to be a reporter.

But by the end of that summer, I had an additional goal: I wanted, so desperately, to one day be a reporter at the Olympics.

At age nine, I remember thinking there was something so magical about the Olympics. The spirit. The excitement surrounding athletes in any sport, simply because they were wearing “USA” on their chest. And as I got older, that “magic” never faded.

If you interview an Olympic-bound athlete, many times they will tell you competing in the Olympic Games is the fulfillment of a long-time goal, launched as a little kid in summer track clubs, kiddie swim camps or high school fencing leagues.

More often than not, they will say making it to the Olympics is a dream come true.

But as I learned a long time ago, athletes aren’t the only ones with Olympic dreams.

Thanks to the reach of television, millions of people worldwide, including nine-year-old Blayne, have proof that “Olympic Magic” extends far beyond the fields of competition.

Now, two decades later, helping bring that magic to others through my own coverage, is more than coming full circle.