I remember the first time I became aware of flags flying at half staff. It was April of 1995. President Clinton had ordered the lowering of flags across the country – a symbol of honor for the 169 people killed in the Murrah federal building bombing. As an Oklahoma City girl, I was intimately close to that moment. Even in third grade, I realized the gravity of both what had occurred, as well as the national gesture to honor it.

That was the first time.

I had just wrapped up an interview at Atlanta Police Department headquarters. As I walked out of the front doors, lugging my camera and gear toward my SUV, I happened to glance at the four flags flying outside of the APD building.

They were flying at half staff.

I paused. I looked. I noted the flags. But it was my first immediate thought, my initial reaction that caught me off guard:

Which tragedy are we mourning this time?

This wasn’t my mind’s clever way of vocalizing or expressing the state of the world, though it could certainly be warranted.

“My mind raced. I clawed frantically at my mind’s encyclopedia. Which tragedy are we mourning this time?”

But in a dark whirlwind of mass shootings, hashtags, terrorist attacks…for just a few moments, I truly did forget which tragedy these flags were meant to honor.

As a journalist, I and many of my colleagues – for better or worse – have an almost encyclopedic knowledge of tragedy. We can rattle off the names of fatal shooting victims from years past. We identify streets and intersections around town by what act of crime was committed nearby. I personally have logged more tearful interviews with mourning loved ones than I care (or am able) to count.

And when a tragedy of national or international proportion hits, as journalists, are all in. We memorize suspect and victims names. Inhale every official update. Affix ourselves to Twitter feeds, news conferences and AP wires for the smallest update, and scour for any hint of a “local connection” – someone nearby who may have been affected.

If I pause long enough to think about it – truly, it is an exhausting process.

But today, standing in the July Atlanta sun outside of the police department, all of those many details suddenly blurred together for me.

Who is our country mourning today?

My mind raced. I clawed frantically at my mind’s usually organized encyclopedia. Were these flags for the 49 people killed in Orlando? My morning news feeds were filled with terrifying reports from Nice, France – are we mourning with our ally after the latest terrorist attack on French soil? Are these flags crying for the 5 Dallas police officers snuffed out by sniper bullets, a cruel attack born from the equally cruel reality of yet more deaths?

Which tragedy is it today?

As I got into my car, my mind went back to third grade me: a little girl who witnessed a national tragedy for the very first time – the hate enacted upon a building only ten minutes away from my childhood home. The flags for me, then, were a tremendous symbol.

Today, it seems that symbol is almost a mainstay. Unlike 21 years ago, this time, those flags are not weeping for my hometown.

But as the symbol of national mourning is now unveiled on a seemingly daily basis, the impact hits equally close to home.

This week, if you happen to catch me on air, or see me out and about in the city, I invite you to do one thing:

Ask me about my little black dress.

There’s nothing remarkable about the dress itself. It’s not created by a big-name designer, nor does it have any noteworthy embellishments. In fact, quite the opposite.

But this dress has a story.

There is an epidemic in our city. It’s hit 24 percent of our city’s population, according to 2013 data. African-Americans and single mothers are most at risk. Even young people can’t escape: 38 percent of children under 18 are affected. And for those caught in its unforgiving grasp, it’s a dismal cycle that is not easily, if ever, broken.

Generational poverty. To read about it is one thing: a sterile list of numbers, statistics, possible contributing factors. Perhaps a map or two.

But for those living it, it means surviving on as little as $2 a day. Going hungry so your children can eat dinner for the night. It means unstable housing, washing and re-washing the same clothes to wear day after day. And it means living with the fear that at any moment, an unexpected emergency – something as simple as a sick child or a late bus – could cost your job, spelling disaster.

Identifying generational poverty is the easy part. But the task of climbing out, of moving beyond these circumstances can often prove insurmountable.

This week, the Junior League of Atlanta is working to raise awareness and funds for Atlantans trapped in this vicious cycle. All week long, members will participate in “The Little Black Dress Initiative” – a campaign to wear the same black dress every day for an entire week, along with a simple button: ask me about my little black dress. For many women living in generational poverty, varied clothing options are simply not an affordable luxury. The weeklong campaign culminates in a community event Saturday morning at Georgia Tech.

As a Junior League member, I’m proud to take part in the campaign. Now don’t get me wrong – I don’t pretend to be so naïve as to think a week of black dresses alone can eradicate the issue. Nor do I pretend that my choice is even close to the struggles these women face daily. I’m very fortunate: as I prepared for the week, I sifted through at least 5 different “little black dresses” in my closet. I can add a necklace or blazer here, change shoes and lose a belt to give the dress a different look all week. For so many women, there are no such luxuries.

So this week, I invite you again: ask me about my little black dress. The dress has a story – not mine personally, and likely not yours. But as long as hundreds of Atlantans remain trapped in the web of generational poverty, this is a story that belongs to all of us. And once we realize that, only then can we work to bring it to an end. 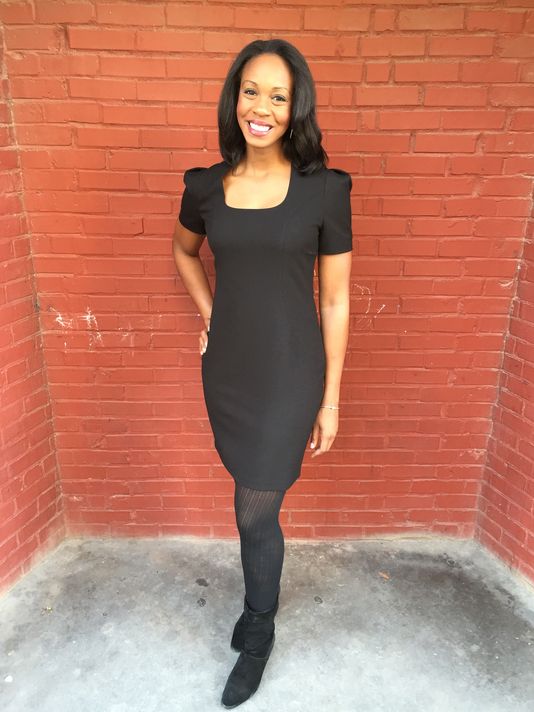